The ovens in which cooking is carried out, which is the most important stage in the formation of ceramics, are divided into several classes. This distinction is taken into consideration: The operating principle of the furnace, the shape of the furnace, the state of the fire that provides cooking and the type of fuel. When categorizing ceramic furnaces, their working principles are based on and gathered under two large groups: Periodic (intermittent) work and Continuous (continuous) employees. Periodically working furnaces are filled, cooked, cooled and discharged. Once these processes are finished, the oven is only ready for a second cooking.

In the beginning, the fire would burn at the base in primitive chamber furnaces, pass through the goods and reach the top of the chimney. Its ceilings were either flat or roofed. Rectangular-shaped furnaces with ceilings in the shape of ceilings were built on the sides of the firing, with chimney drafts at the bottom. The walls of the arch are heavily built with thick walls. Outer walls are tightened so that they do not deform with iron constructions.

As fuel; coal, gas and oil are used. Since the combustion gases reach the chimney through the floor, the fire circulates among the goods.

The chamber furnaces in which refractory (fire-resistant) materials are cooked can go up to 40-80 m and for the setter up to 80-150 m.

In continuous ovens, a certain area of ​​the oven is constantly hot, as the cooking temperature is constantly provided. The goods to be cooked cook as they meet this temperature. In this case, filling and unloading processes continue without needing to quench the furnace.

In addition, differentiation is made in the furnaces according to the direct or indirect contact of the fire, which will cook the product, and whether the fire is mobile or fixed.

Today, it is a type of oven used in almost all types of businesses, workshops, schools and laboratories.

Special resistance wires, which pass electrical current through them, provide the cooking temperature in the oven. There is a clean burning atmosphere as the atmosphere. Since there is no smoke emitted by the fuel, there are only ventilation holes instead of the chimney. The goods to be cooked can be placed directly inside the electric furnaces or they can be introduced through cars filled outside.

Some losses occur as a result of the obligatory interruption of the combustion continuity from time to time in the furnaces operating in this type periodically. These losses; are manpower, energy, time losses.

The channel in tunnel furnaces lies flat and can usually be between 20-200 m. Tunnel furnace trolleys carry the goods to be baked in the oven in the fire zone. Other transport vehicles are fireproof plates that slide in the oven and are used when the oven length and cross section are small. Usually, small sectioned tuna ovens are made with multiple channels and are called passage furnaces. Because of their rapid, efficient and economical status, they have brought great stages in cooking. Among the most cooked goods are wall tiles, electro porcelains, special ceramic products.

In passage ovens, the temperature losses are low due to the very close channels of each other. The canals can be fed in the same direction, but also mutually. Thus, one cools the cooling zone of the other and coincides with the first warm-up zone, resulting in great temperature savings.

Tunnel ovens can also be named for direct and indirect heating. In direct heating, there are no obstacles to the temperature source. Depending on the type of fuel used, the fire either circulates between the goods or burns at a certain distance from the goods, such as in electric tunnel furnaces. Since the temperature distribution is easier in the furnaces that are directly heated, the tunnel widths of the furnaces can be 3.50 m and their height is around 2.20 m.

The “preheating zone” (A), which is one of the three important regions that make up the oven, is at the entrance of the oven. It is found and heated by directing the hot gases formed in the combustion zone here. Goods that are not heated well lead to firing errors. The "fire zone" (B) is located in the middle of the oven, where the goods reach the highest temperature and cook. The “cooling zone” (C) is the zone of the furnace that starts at the end of the fire zone and goes up to the exit. Hot air gained from here, heating the combustion air, drying rooms, etc. can be used for. 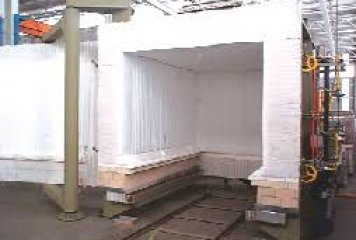 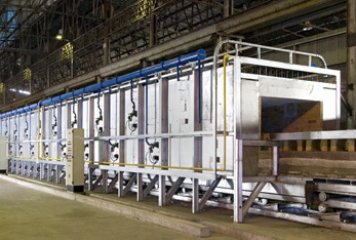 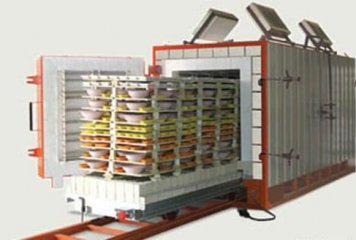 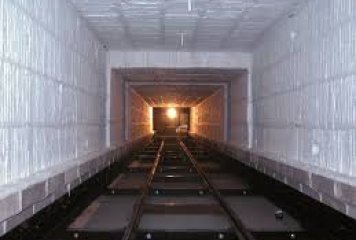 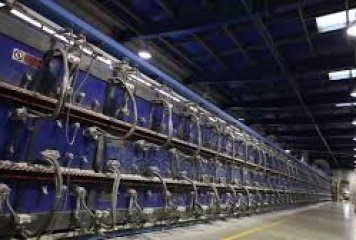